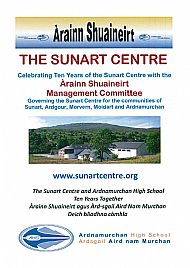 Residents from five communities throughout the Ardnamurchan and Morvern peninsulas gathered on Saturday 8th September for a Celebration of the 10th anniversary of the opening of the Sunart Centre (Àrainn Shuaineirt) and Ardnamurchan High School in Strontian, hosted by the Àrainn Shuaineirt Management Committee and the Ardnamurchan & Morvern Community School Action Group who campaigned long and hard for the school to be built.

A fun day featuring a range of activities for all ages, including body zorbing, face painting, community art and visits from favourite children’s characters “Hello Kitty,” Tigger and Mickey & Minnie, accompanied by free refreshments throughout, ensured a busy and enjoyable time for everyone present.

As well as celebrating the success of the well-used community facility, which includes Ardnamurchan Library, a fitness suite and a first class venue for hosting dance, theatrical and musical performances, the occasion was used to pay tribute to former local councillor Dr Michael Foxley who helped ensure that locals’ long-held dream of a community high school and recreational facility for the area became a reality.
Chris Millar-Craig, AHS Head Teacher, made a short speech before introducing Hugh Fraser, Highland Council Director of Education. Praising the “vision and tenacity” of all those involved in achieving a community school and recreational facility for the area, Mr Fraser said: “Because of their confidence and aspiration, we can all see this facility in years to come building a truly remarkable future out of a very remarkable past.”

Sunart Centre Manager Eoghan Carmichael then spoke of the partnership between the community and school before introducing tributes to Dr Foxley from the five local community councils, which included a video presentation featuring comments from many residents who wanted to express their gratitude to Michael for his efforts on behalf of the communities he served for 26 years. These included fighting for the construction of four new schools in the area (including Ardnamurchan High School), a variety of much-needed improvements to roads and local transport infrastructure and many other com 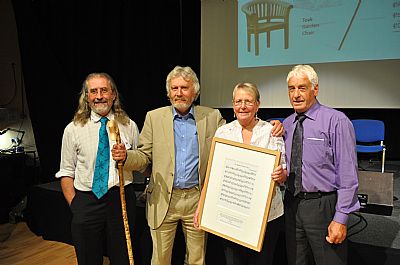 Margaret Cameron, a member of the campaign group for the new Acharacle Primary School and the Sunart Centre Management Committee, and local businessman Donnie MacGillivray, who worked with councillor Foxley on a number of initiatives, presented him with gifts on behalf of the five community councils and Feisean nan Gaidheal - including a £300 book token, a teak garden chair and a walking stick fashioned by Angus Peter MacLean of Kinacarra.

Another special gift, in recognition of Michael Foxley’s “support and achievement during 26 years as a local councillor” took the form of “Dr Michael Foxley’s Jig” - specially written for the former councillor by ceilidh king Fergie MacDonald, and performed in public for the first time by Michael’s niece Hannah MacRae.
Thanking everyone present, Dr Foxley said: “This is quite overwhelming. It has been an absolute privilege to serve as local councillor for the last 26 years, but it is all about teamwork. You don’t get anything done on your own.

“I have had the real pleasure of working with phenomenal people from throughout the area, who have shown tremendous knowledge, enthusiasm and commitment at local level. What has been achieved has only been achieved through an alliance of community, officials and my fellow councillors.”

Praising the “exceptional” work being carried out by High Life Highland staff and volunteers at the Sunart Centre, he added: “This is the best venue in Scotland. What has been achieved with this building is way beyond anything hoped for by those involved in the original campaign.”

High Life Highland, which is responsible for the running of the Sunart Centre, was represented by Ian Murray (Chief Executive) and Laurence Young (Chair), and retired Highland Council Convener and Scottish Executive Minister for Education and Young People Peter Peacock made the closing remarks, congratulating the Sunart Centre and AHS on their partnership and regaling us with a few final anecdotes on Michael Foxley’s period as Councillor.

Sunart Centre manager Eoghan Carmichael, said: “We are delighted that so many people turned up to help us celebrate the tenth anniversary of our opening, and to have been able to provide the opportunity for our local Community Councils to make this well-deserved presentation to Michael Foxley”.

29/8 Three Lochs Book & Arts Festival30/8 Three Lochs Book & Arts Festival
High Life HighlandThe Sunart Centre is managed and funded by High Life Highland in partnership with our Management Committee
Moidart.comWelcome to Moidart, Ardnamurchan and The Rough Bounds
West Highland PeninsulasLocal accommodation and things to do
Ardnamurchan High SchoolOur partner in the building and in spirit.
Glenuig HallVisiting the area? Check the website of Glenuig Hall to see what else is on during your visit.