Fresh out of prison, a Scottish woman juggles her job and two children while pursuing her dream of becoming a country music star. She soon gets her chance when she travels to Nashville on a life-changing journey to discover her true voice.

From the moment we hear her singing Patsy Cline songs, though, Rose-Lynn’s talent and force of personality are apparent. But this is more than just another rousing, feelgood film about a talented outsider overcoming adversity. Wild Rose has some thorny observations to make about class, opportunity (or lack thereof), and family values.

Irish singer and actor Jessie Buckley gives a searing performance as the would-be Loretta Lynn from a Glasgow housing estate. Whether crooning through a letterbox to announce she is back home from jail, guzzling down her employer’s brandy, or having sex in the park with her even more delinquent boyfriend, she simply can’t be constrained. 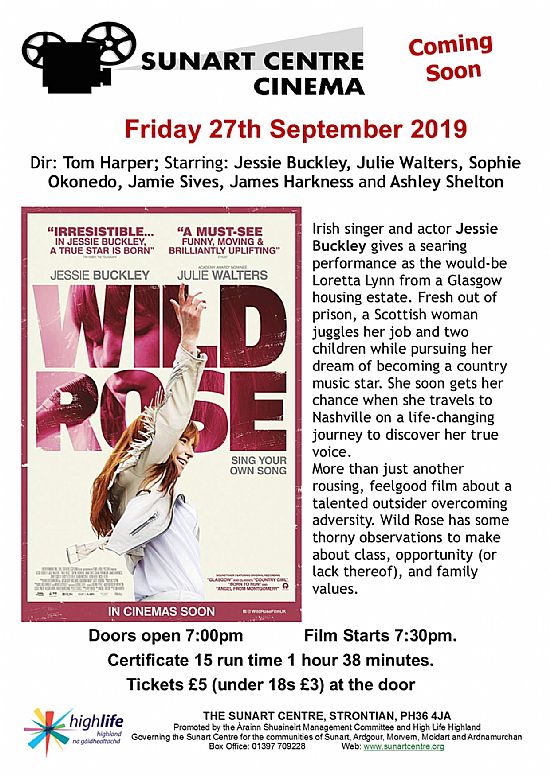 29/8 Three Lochs Book & Arts Festival30/8 Three Lochs Book & Arts Festival
West Highland PeninsulasLocal accommodation and things to do
Ardnamurchan High SchoolOur partner in the building and in spirit.
Glenuig HallVisiting the area? Check the website of Glenuig Hall to see what else is on during your visit.
High Life HighlandThe Sunart Centre is managed and funded by High Life Highland in partnership with our Management Committee
Moidart.comWelcome to Moidart, Ardnamurchan and The Rough Bounds